Michal Kwiatkowski (Team Sky) took his first victory in a monument today when he won a three-up sprint on the Via Roma at the end of Milan-San Remo.

The Pole was able to counter a stinging attack by World Champion Peter Sagan (Bora-Hansgrohe) on the Poggio and descended into San Remo alongside the world champion and Julian Alaphilippe (Quick-Step Floors).

The trio went toe-to-toe on the finishing straight, and while Sagan opened up the sprint it was Kwiatkowski who had the strength to edge out the victory in a thrilling finish.

After the race a thrilled Kwiatkowski said: “Winning Milan-San Remo is an incredible feeling. I’m really thankful for my team-mates. They did an incredible job today. I didn’t expect Sagan would go on the Poggio. It looked like it was leading to a bunch sprint.

“I felt pretty strong and it was amazing to be there with Sagan and Alaphilippe. I tried to focus to do my best sprint. It’s unbelievable.” 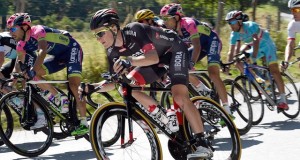 Sam Bennett drops out of the Tour de France