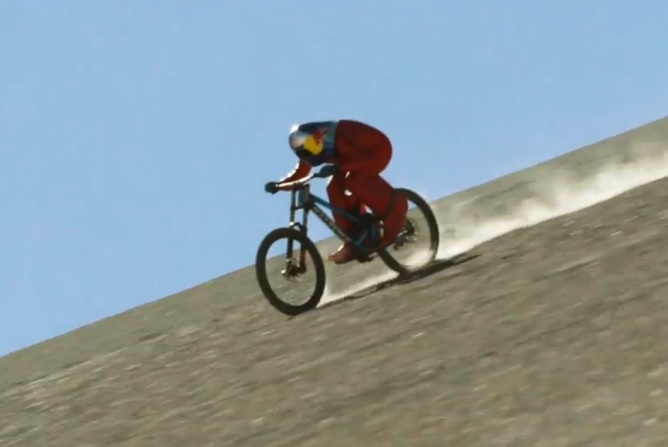 Markus ‘Max’ Stöckl recenty set out to beat his own speed world record for cycling down a gravel-based mountain on a production mountain bike. The previous record was set by Max in 2011 when he bombed down the volcanic cone of Cerro Negro in Nicaragua at 164.95kph.

Stöckl and his six-man support team identified Chile’s Atacama Desert on the country’s Pacific Coast as the place to try and set the new record. The Austrian chose a mountain slope in the desert that had a summit of 3,972m altitude, a 45-degree slope at the start area and a run-off that was 1200m from top to bottom. There was also ideal wind resistance in the surroundings at this spot.

To make the speed attempt as safe as possible, Max wore a special suit, an airbag – similar to the ones ski racers and jumpers use. The helmet that was used was self-made. The mountain bike he used was a Mondraker downhill bike. Nothing was added or changed on the bike to make it go faster.

Stöckl tested the slope eight times to work out an ideal line and to get a taste of the speed he’d been running down the slope at before going for the run to try and beat the world record.

During the record attempt run, he clocked up a speed of 167.6kph thus beating his previous record. It took Max 11 seconds and 650m to reach his top speed.

Relieved and of course delighted, Stöckl was quick to express his emotions after the run.

“It was so exhausting, even though the ride only lasted for 20 seconds,” he told Redbull.com afterwards. “I just can’t express the feeling in words. Even if you know it is only going to be 10 or 15 kph quicker than the last training run – standing up on the summit of the mountain, looking down and feeling the adrenaline was a very moving moment!”

Check out the GoPro footage of the record run in the player below.

Want to know more about the V-Max project? A full documentary will air on Red Bull TV on April 20, 2017. 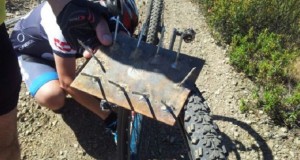 Cyclist left paraplegic in Spain due to rock placed intentionally on...