Following on from the disappointment of the collapse of the Dynamo Cover Pro Cycling team recently, Mark Downey who was set to join the team, has found a new deal for the 2016 season.

The 19 year-old Irish rider will ride for VC Toucy who finished in the top 5 of last season’s Coupe de France DN2. He has signed a one-year deal with the team.

VC Toucy have strong links with World Tour team FDJ, and current FDJ rider Cedric Pineau previously raced with the team. In addition, a former Directeur Sportif of the team, David Han, now works as a coach for FDJ.

Grégoire Terrier, the Directeur Sportif of VC Toucy, called Yann Dejan following the collapse of Dynamo Cover and the three men reached an agreement for 2016

Downey who is currently training with the Irish track team in preparation for the next World Cup round in Hong Kong spoke to Be-Celt.

Mark Downey: “It’s really good to be able to join VC Toucy. I was really disappointed after the collapse of the team but Yann never abandoned us. When Grégoire Terrier offered me this position, I spoke with Yann and he encouraged me to sign.”

“They have a very good calendar and also some good DN2 races. In addition, they will let me participate in on the track with the Irish team and the Olympic Games if we qualify. 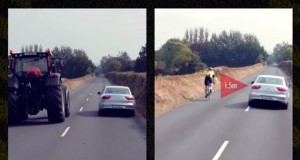 Give the same room when overtaking a cyclist as a tractor