Irish pair Mark Downey and Felix English have this evening taken their first victory in a race at the Six Day Series. The pair emerged victorious in the Elimination race on day two of the Berlin round of the series.

The result pushed the pair into the top ten on GC after lying in 11th place overall after the first evening of competition.

That's how you do it!

Attacking racing from @MarkDowney03 and @FelixEnglish11 sees the 🇮🇪 duo get their first ever #SixDaySeries victory 💪, in the team elimination race 👹 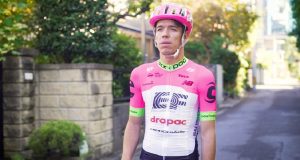