Tirreno-Adriatico begins tomorrow and the race will feature a team time trial, sprint stages, undulating stages, a mountaintop finish and an individual time trial all squeezed into the 7 days of racing.

Stage 1 will be a 22km team time trial and stages 2-4 could be stages where the punchers try to get one over on the sprinters. It will be down to whether teams can keep the race together for their fast men over these 3 days.

Stage 5 will be a real GC day as riders’ finish at the top of the Monte San Vicino, a tough 14km climb. The penultimate stage should see the sprinters and punchers going at it on another uphill sprint finish before the Tirreno-Adriatico concludes with a 10km individual time trial around San Benedetto del Tronto on stage 7. The weather could also play a role in the race outcome as cool temperatures and rain are forecast for the week of racing.

Team Dimension Data for Qhubeka will have a strong team at the Tirreno-Adriatico, led by the recently crowned Madison World Champion, Mark Cavendish.

Edvald Boasson Hagen, will look to continue to build on his form at Tirreno-Adriatico ahead of the Spring Classics. Steve Cummings who finished 6th overall at last year’s edition of the race also returns to Tirreno.

Steve Cummings
I am looking forward to getting my season going at Tirreno-Adriatico, it was a good race for me last season. Hopefully, the team can continue racing at Tirreno in the same manner as what we have already started this season. We have a strong team for Tirreno so it should be a great race.

Roger Hammond (Directeur Sportif)
I’m really looking forward to this week, we have a very strong and versatile team that can be competitive on the varied terrain that Tirreno-Adriatico presents each day. In Edvald and Steve we will have two riders testing their stage race form, while Mark will be making his transition back to the road after a successful track campaign. It is going to be an exciting week for the team. 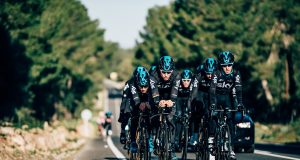