During his trip to South Africa to meet with his new Dimension Data team, Mark Cavendish took time out yesterday to try out a different sport.

The former World Champion joined up with MotoGP rider Cal Crutchlow to try out a race motorbike for the first time at Killarney Race Track in Cape Town. The pair are friends, spending time together training.

“In the winter I basically turn into a professional cyclist,” Crutchlow told BBC Sport in a previous interview. “I live on the Isle of Man when I’m not travelling around the world racing, and that is where Mark is from.

“It’s only a small island and you soon get to know everyone. We met a few times out on our bikes and now, whenever me and Mark are both in the Isle of Man we train together a lot. I try and go and see him race when he’s in Europe and he comes to watch a few MotoGP rounds if he can.

“I ride a lot with Mark. There is a big mutual respect between us, we both love each other’s sports. It crosses over well and we are good friends.

Cavendish seemed pleased with his efforts as he tweeted afterwards: “When I grow up, I want to be @calcrutchlow.. Got my knee down & everything! ”

According to Jonny Towers who helped organise the track session, the Manxman was also pretty skilful on the bike, as he tweeted: “Turns out the @MarkCavendish can ride a Moto pretty fast too. First time on a track and only 3 secs off lap record” 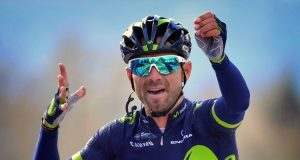