After Marcel Kittel (Quick Step Floors) won his fifth stage of this year’s Tour de France in Pau, it may have seemed that the competition for the green jersey was all but over.

Following on from that eleventh stage, Kittel had a lead of 133 points over his nearest competitor, Michael Matthews (Team Sunweb).

However since then, Matthews has won stage 14 from Blagnac to Rodez and has also taken points in a number of intermediate sprints, reducing Kittel’s lead to 79 points.

Kittel has admitted that he is feeling fatigued but that he is ready for the fight as the race resumes today following the second rest day.

“It’s no surprise if I say I am tired, everybody is after all these brutal stages in the Pyrenees and the Massif Central,” said Kittel.

“The Tour has been really tough so far and I expect a very hard final week. I have a nice lead in the points classification, but many things can still happen in the last stages and I’ll continue to fight for this jersey. I am focused and motivated to make it to Paris, so let’s hope for the best.”

The race continues today with a 165-kilometre stage from Le Puy-en-Velay to Romans-sur-Isère. The riders will face two category three climbs in the first half of the stage and an intermediate sprint at the 121-kilometre mark. 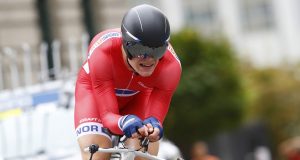