Ireland’s Marc Potts went close to a medal at the 2017 UEC Track Elite European Championships in Berlin tonight when he took fourth place in his first bunch race at a major track competition.

The Tyrone man narrowly missed out on a medal in the Men’s Scratch Race, which was won by Adrien Garel from France. Kriszten Lovassy (HUN) and Roman Gladysh (UKR) rounded off the podium with silver and bronze. Earlier tonight Lydia Boylan was twelfth in the Women’s Elimination Race.

Speaking after the race Potts was happy with his result, though disappointed to have missed out on a medal. The Neon Velo racer said: “Over the past few months I have raced a lot on the track. A bunch race on the track is something I’ve wanted to do for a long time. I’ve always said that if I got the call up I would need to be willing to get a result. Tonight, I was really motivated to impress.”

It was bittersweet for Potts at the end of the race, with the Irishman being initially announced as the bronze medallist: “It flickered to bronze at the finish, so I got to see what it felt like to medal. It made me hungry to do it now.”

The race went to plan for Potts, who gained a lap with three riders by the halfway mark. “The plan was from the start to do nothing for ten laps, and to go when it was hard, with anything that was going. I got the lap early on. I’m still quite new in the Scratch Race, so I made a lot of mistakes, but a bit more experience will knock that out.”

“I felt pretty good after the lap, and I just let the rest of the race happen. My coach said to relax, so I wasn’t trying to chase down moves. My motivation is pretty high at the minute, and I’ll see how the World Cups go, and try to qualify for the World Championships after that. Today proved that my coaching has worked.”

Irish Track Coach David Muntaner was happy with Potts race – “It was a very good race, his first big international mass start race, so it a good start. We are going to keep moving and keep improving, I’m very happy with Marc tonight.”

Tomorrow is a full day for the Irish Team with Eoin Mullen competing in the Men’s Sprint, Felix English in the Men’s Omnium and Lydia Gurley in the Women’s Points Race. Junior JB Murphy is making his debut on the elite stage in the Men’s Elimination Race. Racing at the European Championships continues until Sunday 22nd October. 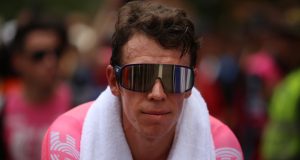