Ireland’s Lydia Gurley narrowly missed out on a medal in the Scratch Race at the 2017 UEC Track Elite European Championships in Berlin today. The Galway woman lapped the field with the three medallists in the latter part of the race, before being pipped on the line for a medal. Gold went to Trine Schmidt (Denmark), silver to Ukraine’s Tetyana Klimchenko, and Russia’s Evgenia Augustinas took bronze.

In the Omnium Lydia Boylan was 8th and European U23 bronze medallist Mark Downey finished 12th in the Points Race. In his elite championship debut, junior world silver medallist Xeno Young was disqualified in the Individual Pursuit. His time of 4.27.445 for 4km was removed from the final results after it was ruled he rode in the slipstream of Belgian’s Sasha Weemaes once he was overtaken. Robyn Stewart finished 13th in the Keirin.

Speaking after the race Gurley was disappointed to miss out on the podium – “I’m gutted really. To be honest I feel like I lost a European medal rather than gained a fourth. I always go into a race thinking I can do something, and I’m disappointed – I think I was strong enough to get a medal.”

Relatively new to racing 33-year-old Gurley rode a smart race, and made the move of the day – “Myself and David (Muntaner – coach) spoke before the race, and decided I’d save my energy and take it easy for the first 40 laps. I was happy to see attacks go and get caught again. My one move was concise, and it was a good one. In order to gain a lap, you need two things – you need the legs, and the right time to move. I waited for the pace to ease up. I was patient and went for it.”

“The Ukrainian went at the same time, and the Russian came across to us. When Schmidt rode over to us, I was kind of disappointed on one hand – as now there were four of us, with only three medals. But she is a form rider, so it was good to have her in the break. Everyone was motivated to get the lap, which we got with 7 laps to go.”

“When we caught the group, I was at the front, so I found myself at the back of the bunch, while the others moved straight to the front,” Gurley added, believing this mistake cost her a medal, “it’s a hard lesson, but I’ve learnt it now. I enjoy doing the Scratch Race, I enjoy trying to get into the right move – it’s like a chess match. Maybe with a bit more reflection I’ll be happy with fourth. Ultimately, you can’t feel sorry for yourself. I’ve the Madison tomorrow – I’ll have to move on and use that energy for tomorrow’s race.”

Gurley is teaming up with Boylan for the Madison tomorrow, an event that has recently been added to the Olympic programme, and is looking forward to the race – “We are two strong riders. If we can start okay, we are strong enough to do something.”

Boylan was competing in the four event Omnium today, with consistent racing across all events netting 8th overall. The event was won by World and Olympic Champion, Katie Archibald, who is also her Team WNT Pro-cycling teammate.

Tomorrow is the final day of racing at the European Championships, with Ireland fielding two Madison pairings – Mark Downey and Felix English compete in the men’s race, and Lydia Boylan and Lydia Gurley team up for the women’s race. The Madison has been added to the Olympic programme for the Tokyo Games in 2020. Sprinter Robyn Stewart will be in action also, competing in the Sprint. 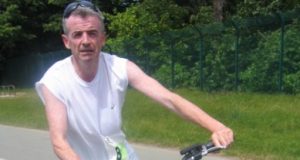 ‘We should take the cyclists out and shoot them’ – Ryanair’s...