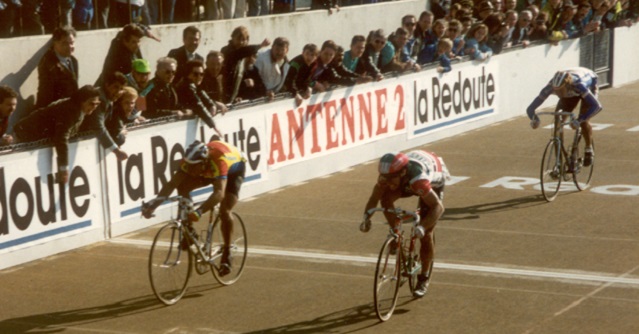 Arguably the closest ever finish in a monument was the 1990 Paris-Roubaix, when a photo finish was needed to determine the winner.

An elite group formed that day after the Forest of Arenberg which included five from the Panasonic team. With nearly one hundred kilometres of the race still left, one of that team, the Belgian Eddy Planckaert attacked, and another six riders would bridge across to him.

Amongst those who bridged across to him were the Canadian Steve Bauer, fellow Belgian Edwig van Hooydonck from the rival Buckler team, and most importantly his team-mate Jean-Marie Wampers.

Wampers helped to keep it together for Planckaert, who would have been considered the strongest sprinter. Van Hooydonck tried to catch the others by surprise in the velodrome by going early, but he was brought back.

It came down to Bauer and Planckaert in the sprint finish, and it was incredibly close. It would take the judges several minutes to determine who was first across the line, before awarding victory to Planckaert. The winning distance was supposed to have been a centimetre.

Bauer was disconsolate and slumped to the ground in the middle of the velodrome, while Planckaert celebrated with his brother Walter, who was also his directeur sportif.

Planckaert would later say, “It was a beautiful, beautiful day. It was more beautiful for me to win by a few millimetres than if I had won alone, five minutes in front of the next rider, because everyone remembers it.”

Here’s some grainy footage of the last few kilometres of the race. 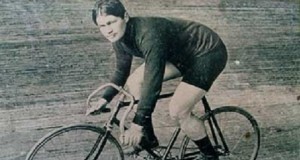