After two years with Team Sky, Leopold König has signed for BORA – hansgrohe for next season. The Czech rider previously raced for the team for four years from 2011 to 2014 when it was known as Team NetApp and achieved some impressive results with the German squad.

Amongst his best results were 7th in the 2014 Tour de France and 9th in the 2013 Vuelta a España and a stage win. With Team Sky he finished 6th in the Giro 2015. Next season König, who signed a three-year agreement, will be the team’s leader for the Tour de France starting with its Grand Départ in Düsseldorf, Germany.

“It was Enrico Poitschke and Ralph Denk back then who picked me up from a small continental team and gave me the chance to race the biggest races in the world and to progress as a rider,” said König. “So when I heard about their new project and ambitions I felt like coming back home where it all started.”

“I’ve learned a lot the last two years with Team Sky and I’m extremely grateful for this experience. Now I’m ready to give my best in the coming years and chase our ambitious goals.”

“I am very happy that Leo is coming back to our team BORA – hansgrohe,” said Team Manager Ralph Denk. “I feel honoured, because it is a big evidence of trust to make that move coming from Team Sky, and even 2016 was not his best season he still is one of a few riders that has the potential to finish a Grand Tour on the podium.”

“Once we developed Leo from amateur level to a top ten Tour de France rider, now we look forward to learn from his experience from the last years.” 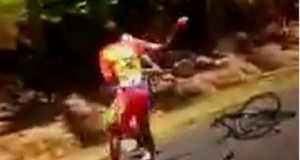 Cyclists Come to Blows at the Tour de Guadeloupe (VIDEO)