Irish teenager Lara Gillespie once again showcased her prodigious talent by winning gold in the Points race at the European Junior Track Championships at the World Cycling Centre velodrome in Aigle, Switzerland.

The win followed on from her silver medal at the Individual Pursuit at the Championships on Thursday where she also set a new Irish record. She also narrowly missed out on a medal in Friday’s Omnium where she finished fourth.

In yesterday’s Points Race, the Scott Orwell Wheelers rider beat Ukrainian rider Olha Kulynych and Poland’s Marta Jaskulska to take the gold having won two sprints during the race and winning the final sprint to fend off the challenge from Kulynych.

The win is the latest in an ever-growing palmares for the 17 year-old. Last month, she was crowned Junior Women’s Champion at the Irish Road Race Championships and she also won four golds at the Irish Junior Track Championships earlier this year.

In addition to excelling on the road and track, the Wicklow rider has also really impressed at cyclocross. In February this year, she finished 23rd in the U23 race at the 2018 UCI Cyclocross World Championships in Valkenburg, the Netherlands and was also the fourth junior over the line. 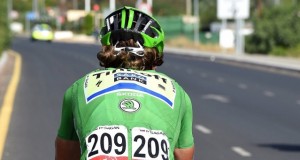