25-year-old Julian Alaphilippe powered to his first World Tour victory of the season on the opening stage of the Vuelta al Pais Vasco and in doing so became the first Frenchman since 1999 to lead the race. Alaphilippe surged clear on the grueling Elkano climb together with Primoz Roglic (LottoNL-Jumbo), scorching the fast descent to Zarautz and holding off the Slovenian in a two-man sprint.

The 162.1km-long stage had been animated by four riders, who were joined by two others some sixty kilometres from the finish. Despite the new forces, they couldn’t stretch out their advantage to more than two minutes and got caught ahead of the fifth and final classified ascent of the day, a real bruiser with 20% maximum gradients, that topped with less than seven kilometres to go.

A natural selection took place halfway through the climb, before Julian Alaphilippe got out of the saddle and launched a stinging attack which dropped all bar one rider. Together with Roglic, the 25-year-old Quick-Step Floors rider put in some strong turns, increasing the gap over the first chasing group.

In Zarautz, a small town which hosted a Vuelta al Pais Vasco stage finish for the first time, Alaphilippe hit out in the sprint with 200 metres to go and outkicked Roglic for a victory that France had been waiting in this race since 2006.

“I am very happy, especially as I got sick after Milano-Sanremo and had to rest before returning to training,” said Alaphilippe. “I was very motivated after this small setback, so I worked hard to be back at my best. The plan was to take a stage here and even though we did a recon of the final climb yesterday and on paper it suited me, I didn’t know how my legs would react following that break.

“I was focused, smart and strong, I worked well together with Roglic, who too was very strong, and in the end I bided my time before powering to this nice win. A big thanks to my team for protecting me today and to the amazing crowds, who cheered for us before the start and at the finish.” 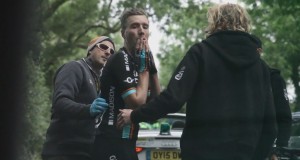 Madison Genesis: Behind the scenes at the Tour of Britain