Trek-Segafredo surrounded Degenkolb with a team of Classics and lead-out specialists for the 178-kilometre race, giving the German sprinter the support he needed for a much-needed win with his last almost a year ago in the Dubai Tour.

“It’s a great feeling to get the first victory already, to achieve this together with the team,” Degenkolb explained to journalists shortly after the finish. “We had a really nice week of training already this week in Mallorca, in the training camp, and to start the season like this with a win is always great.

“I felt really good; the team did a perfect job to make a good sprint for me. I have good memories of this race because for me this was my first professional race in 2011. Today was a great revival.”

“We have already won two races as a team, and I think for the whole team it’s a big relief to start the season like this,” continued Degenkolb. “Everyone knows we have done our homework, what’s needed to win races, and I think we can be very optimistic for the next races.”

Degenkolb has had his share of misfortune in the last few years, from his horrific training accident in 2016 to respiratory issues at the end of 2017 severe enough to hospitalise him. His respiratory problems forced him out of the Vuelta a España, the Tour of Denmark, and caused him to forego the World Championships in Bergen, Norway, where he would have led the German team as one of the race favorites.

“It’s a fantastic feeling! I have worked really hard this winter, and after all what has happened at the end of last year, this is such a big relief to get this winning feeling back and know that I am still able to win races because it’s quite a long time since I crossed the finish line in first position,” exclaimed a happy Degenkolb. “For me, it’s just very amazing to feel that, and to also to feel the whole support from the riders: The whole team for the whole winter was behind me and pushed me to come to this level again.” 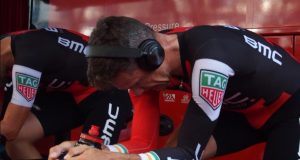