John Buller was the best of the Irish in the Junior Men’s Road Race at the UEC 2017 European Road Cycling Championships in Herning, Denmark today.

In a flat race with a predictably fast bunch sprint finish, the Banbridge man finished 24th, with PJ Doogan just behind him in 25th place.

The European title went to Michele Gazzoli (ITA), silver to Norway’s Soren Waerenskjold, and the bronze medal was won by Niklas Markl (GER).

On the flat 120.6km course, the 20km circuit promised fast aggressive racing: “We expected a bunch gallop, which it was, so we put all the powers behind getting John to the finish. Ben Walsh was very aggressive in the race, but he punctured, and we were unlucky to lose Aaron [Doherty] in the first lap due to a crash. He got back on the bike, but had no chance of getting on.”

Tomorrow will see the U23 Men compete over 160.8km in the morning, with National Champion Lydia Boylan contesting the Elite Women’s 120.6km Road Race in the afternoon 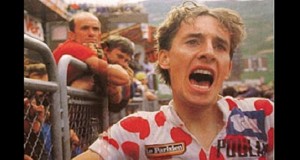 40 Years of the Polka Dot Jersey