The Irish Women’s Team Pursuit squad have posted their best result at a World Championship finishing 8th in Berlin on Thursday.

Mia Griffin, Kelly Murphy, Alice Sharpe and Lara Gillespie lowered the national record by over four seconds with a time of 4:21.368 in qualification on Wednesday. The effort saw them progress to the first round where they faced 2019 World Champions, Australia on Thursday.

Ireland’s quartet was beaten by Australia and so missed out on the medal rides – Australia going on to finish 4th. The Irish team stopped the clock just outside their national record in a time of 4:21.844.

The result is another huge step forward in the team’s development, taking almost 8 seconds off their 4,000-metre time within a 12-month period.

Speaking after the race Alice Sharpe said: “We had set our sights quite high; we were hoping for sub 4:22 so we achieved that and can leave happy and proud of the work we have put in.”

Felix English who went in the Men’s Scratch race on day 2 of the World Championships and showed he is in good form ahead of his target race, the Men’s Madison. He hit the front early in the 15-kilometre race, part of a large move looking to gain a lap on their competitors. The attempt was ultimately brought back, and a later move proved more successful.

English finished in a very solid 11th place from a field of 24 riders. Yauheni Karaliok of Belarus was one of six riders to gain a lap and went on to win the sprint to take gold.

English will team up with Mark Downey on Sunday for a chance at securing an Olympic slot in the Men’s Madison. 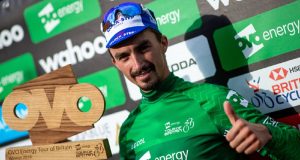