The Cycling Ireland National Championships Road Races start this weekend, with the elite women and junior men racing today, and the senior men and junior women competing on Sunday.

The 17.56-kilometre circuit in Collooney, Co. Sligo will be a testing one which is anticipated will lead to close racing. The most significant challenge is at the 7.5-kilometre point on the circuit, where there is a significant climb which is 1.5 kilometres in length with an average gradient of 12%.

“I think the hill will eventually take its toll, but it mightn’t be the deciding factor,” said Cycling Ireland Performance Coach Neill Delahaye. “I think that everyone will be apprehensive of the hill, and it will grind people down and have a wearing effect. But I think that on the last lap if you can crest the hill and have a gap, then you have a good chance of winning.”

The elite women will face six laps for a total of 105 kilometres. Lydia Boylan (WNT-Rotor Pro Cycling) returns to defend her title but will face stiff competition from the likes of Lauren Creamer (Brotherton Cycles) and Ellen McDermott (Boompods EDCO NRG) who also finished on the podium last year. If Boylan can achieve the win, it will mark her fourth consecutive National Championship Road Race victory.

Amongst the other riders who can be expected to be in contention include Eve McCrystal (Garda Cycling Club) who leads the Cycling Ireland rankings, the Ballymena Road Club duo of Katharine Smyth and Eileen Burns and Fiona Guihen (Black Rose Racing).

Kelly Murphy (Chapter 2) who won the Elite Women’s Time-Trial on Thursday ahead of Burns and McCrystal is clearly in good form and will be another name to watch out for. 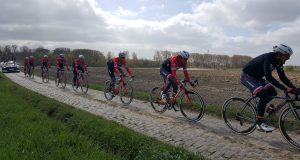