Boylan and Gurley scored two points from an intermediate sprint in the early stages of the 30-kilometer race but one of many crashes during the race saw Boylan hit the deck. Thankfully she was not seriously injured and was able to re-join the race on a spare bike. Gurley was forced to extend her effort as she waited for Boylan to re-join the race and provide some relief as they averaged over 50kph.

After the race Lydia Gurley said: “It was carnage from my point of view anyway. I think it wasn’t pretty, but we got the job done and that was the most important thing today. We would have liked a better result, but we took the points and we fought, we really had to fight there. I’m in bits but we’ve done it so I’m really proud of what we’ve achieved today.”

Earlier this afternoon Kelly Murphy set a new national record of 3:29.699, claiming 15th in the Women’s Individual Pursuit. It is the first time an Irish rider has gone under 3 minutes 30 seconds for this discipline, the previous record stood at 3:30.687 and was set by Kelly at the European Championships in October. On Wednesday, Kelly along with her teammates Mia Griffin, Lara Gillespie, and Alice Sharpe knocked 4 seconds off the Women’s Team Pursuit national record to qualify for the next round and finish 8th.

Reflecting on two record breaking rides Kelly Murphy said: “I’m satisfied with my ride today… I ultimately came to beat the time I set at the Europeans Championships which I did. In the timed events, a lot of the girls here have shown that the bar has been raised. I have put in a lot of work (in order) to raise with it.”

On Sunday, Mark Downey and Felix English will hope to qualify Olympic slots in the Men’s Madison while Alice Sharpe will compete in the Women’s Points race. 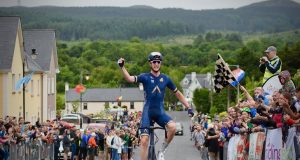