The Dublin round which will be the second race in the series will take on 18 October 2020 and will include Elite and Junior Men’s and Women’s races. Details of the venue have yet to be released.

The announcement is a reflection of the growing popularity of the sport in Ireland and is great recognition for the hard work put in by those involved in the discipline across the country.

The UCI published the following statement:

The new formula for the UCI Cyclo-cross World Cup, organised by the company Flanders Classics, will come into effect from 2020.

The increase in the number of rounds of the series (14-16 in the new format compared with nine at present) will allow the geographical distribution to be improved. A maximum of half the events will be held in Belgium, in this way ensuring the inclusion of prestigious, popular classics in the UCI World Cup. The other rounds will be hosted by nations that are active on the international scene or committed to developing cyclo-cross in their country.

This approach will allow the best athletes in the world to compete in a series featuring the year’s biggest events. Consequently, the UCI Cyclo-cross World Cup will be even better at shining a spotlight on the discipline at a global level and offering a key platform for nations wanting to reach the highest level.

The first edition of the UCI Cyclo-cross World Cup in its new format will consist of 14 rounds as follows: 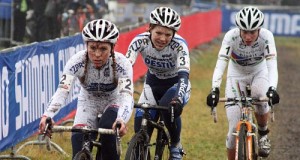