This Saturday, the 105th Tour de France begins with a 189-kilometre flat stage from Noirmoutier-en-l’Île to Fontenay-le-Comte, the first of eight opportunities for the sprinters in La Grande Boucle.

Amongst those expected to be in contention is André Greipel (Lotto Soudal) and the German feels that he is in good shape for the race and that his lead-out train including Jasper De Buyst, Marcel Sieberg and Jens Keukeleire is well able to help him both at the finish and in the event of echelons forming.

Greipel has won eleven stages in total at the Tour de France and this season he has taken six victories, two stages at each of the Tour of Belgium, the Tour Down Under and the Four Days of Dunkirk.

André Greipel: “I had a different kind of season than other years as I wasn’t able to ride the Classics after my crash in Milan-Sanremo. But I did well in the races right after my comeback, with stage wins at Quatre Jours de Dunkerque and the Belgium Tour. I didn’t win recently, but the numbers tell me that I will be in top shape in July.”

“There will be plenty of sprint opportunities and we need to be ready for each one. Starting with the first day. The yellow jersey is at stake that day, but I’m not thinking about yellow; I’m thinking about stage wins and the sooner the better.

“I don’t think that in the first stages teams will want to create echelons because the Tour is still long at that point and it will already be nervous enough as it always is in the beginning of the Tour. But if echelons would be formed in one of the later stages that doesn’t scare us, we have a good team for it and we are always well organised.”

“Jasper De Buyst will be my lead-out man for the first time in the Tour. Jasper has a really good eye for positioning and he has the power to do a good lead-out. Thanks to his track history he has the skills to go a long way at a fast pace. The Tour will be a big step forward for him, and for sure he will learn a lot during those three weeks. I hope we can work well together and achieve success.

“The cooperation with Jasper and Marcel Sieberg has already worked out quite well. Jens Keukeleire will also be helping us in the sprint stages. The team around me is very well prepared. We can dictate a sprint on our own and don’t need to look to other teams.” 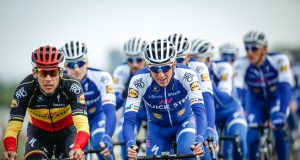