Alberto Contador will kick off his 2016 season at the Volta ao Algarve, next Wednesday, February 17th. According to Tinkoff’s leader, he will head to the Portuguese race “very eager and more motivated than ever”, referring as well to a year in which the Tour de France will be the main goal.

“I went through a good winter period because in Europe we had quite mild weather, something that helped me keep a continuity in my training”, explained Alberto Contador. “I also tried to organize my schedule and the non-sport commitments so that I can train.”

“I was able to complete two very good training blocks with the team, one in December in Gran Canaria and another one in January, in Tenerife. There, we also shared two weeks with Oleg Tinkov.”

“Similar to last year, we worked together, he trained with us and we spent good moments. The team worked very well and I already look forward to starting competing”.

Tinkoff’s leader points out that when he hits the start line next week “nearly everybody will have already put on a race number on their backs and finished a race. I’m also eager to start because I enjoy competing as well”.

Expectations at the Volta ao Algarve are simply to kick off the racing season. For now Contador has carried out “a sound working foundation, thinking in particular that this start will be very important in a season in which the goal is to reach the Tour de France in good shape.”

“This is what I think about, at all times. The Volta ao Algarve always brings fond memories and I consider it to be a perfect race to finetune my form and start my first block of competition, where I hope to have a good level in all races”.

Lastly, Tinkoff’s leader expects “a nice and very competitive race. I believe we will see a very good lineup, with 12 WorldTour teams, while the route will be a bit harder than usual. It features two summit finishes and, in addition, a time-trial that is quite long and flat, being the first one of the season. Nevertheless, it will be interesting for the preparation towards the future goals”. 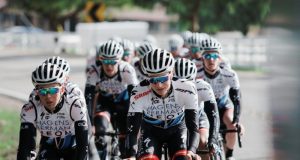 Axeon Hagens Berman to apply for Pro Continental Status in 2018