The first virtual edition of the Tour of Flanders will take place this Sunday 5 April with 13 pro riders taking prt and amongst the riders contesting the race will be Remco Evenepoel (Deceuninck- Quick-Step).

The 20 year-old had a remarkable debut professional season last year winning Clásica Ciclista San Sebastián and the Baloise Belgium Tour overall amongst other races. He started this season where he left off, taking the overall wins at both the Vuelta a San Juan Internacional and the Volta ao Algarve em Bicicleta, which was his last race before the Covid-19 crisis brought racing to a halt.

“I never thought I would make my Monument debut this way, but it’s still better than nothing. I guess I’m the first rider in history to race a Monument for the first time on a smart trainer, and as strange as it may sound, I am looking forward to it. From what I understood, it will replicate the conditions of Flanders, so it should be quite a tough test”, Evenepoel said of the race which will be live streamed this Sunday.

In the closed race, the thirteen riders will be competing over the last 32 kilometres of the Tour of Flanders – on their home trainers. Fans will be able to watch the riders tackle a virtual Oude Kwaremont and Paterberg in real time on the Bkool platform. 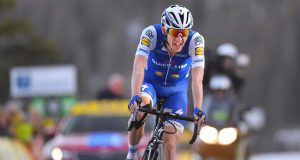