Tom Dumoulin (Giant-Alpecin) has described his disappointment at losing the red jersey of the Vuelta on the penultimate stage of the race.

The Dutchman was devastated to have lost the lead after putting in an incredible performance during the race. After the stage, he explained on the team’s website: “It was too much today. I fought for all I was worth.”

“After the first attack by Aru I had difficulties countering him and closing the gap. I was on the limit. When he went again it was over and there was a gap at the summit.

“I almost came back on the descent after the next-to-last climb. Too bad the descent wasn’t more technical, because on technique I could have come back.

“In the valley Astana pulled with three guys and I knew it was over. I was able to counter the attacks on the previous stages, but today I was unable to.

“I kept on fighting for the podium or top five and went full on to the finish, but there was nothing left in the tank. I was out of energy and it was one day too long.” 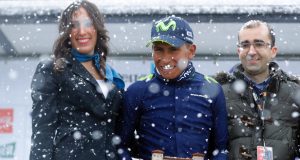