Following on from his disqualification from yesterday’s opening stage of Paris-Nice, Romain Bardet (AG2R La Mondiale) has admitted that he made a mistake and has apologised to the race organisers and fans.

The Frenchman was disqualified by the race jury for being “towed by his team car” after crashing in the closing stages of the race and chasing to get back to the lead group.

His team manager Vincent Lavenu also held up his hand, admitting that it was the team’s fault and saying that it was “the first time in 26 years that this has ever happened to me.”

“We made a mistake due to the fact we weren’t thinking straight at a key moment in the stage, mainly as a result of my crash and the circumstances of a fantastic and animated stage,” Bardet said later.

“I am deeply sorry for my actions because nothing justifies taking advantage of the extensive assistance I received from the team car for mechanical repairs. This practice, too often tacitly accepted within the peloton, must now be guarded against in order to ensure the integrity of our sport.

“I sincerely apologize to the organizers and the fans. I came to Paris-Nice with a great desire and conviction to be an important actor in the proceedings.

“Now I must concentrate on preparing myself for the races that I will face in the next few weeks when I will be dedicated to taking part in my sport in the way that I love it.”

The incident happened after Bardet crashed 122 kilometres into the stage and Dr. Eric Bouvat, team doctor of AG2R La Mondiale explained later that: “Romain Bardet suffered superficial wounds on his elbow, hand, hip, and left knee as well as bruises on his back.”

Vincent Lavenu: “On account of the circumstances that we found ourselves in the race, we were caught up in a panic after Romain’s crash in a very tense stage, and we did not react properly. We admit our fault. This is the first time in 26 years that this has ever happened to me.

“The decision may seem severe, but we respect it. The jury are the ones who guarantee the rules are applied equally to all in our sport.

“I am sorry because Romain is normally an example of integrity and sportsmanship. I know that he will rebound quickly, and will be even stronger in the coming weeks.

“We will continue fighting on the roads of Paris-Nice as a team to show the colours of AG2R La Mondiale at the head of the race.” 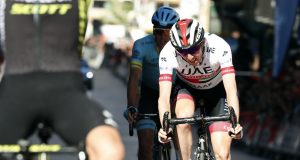