Van Keirsbulck outsprinted his breakaway companion Alex Kirsch (WB Veranclassic Aqua Protect) at the finish line in Dour after the duo had forged clear of the small lead group on the final lap of the finishing circuit.

As they approached the finish, it looked like Kirsch had gotten the better of Van Keirsbulck as he opened up a small gap on the slightly uphill finish. However, the 26 year-old Belgian fought back to overtake Kirsch to take a narrow victory.

It was Van Keirsbulck’s first win since taking a stage of the Eneco Tour in 2014 and he now becomes the first leader of the Napoleon Games Cup. His next race is Dwars door West Vlaanderen (1.1) on Sunday.

Guillaume Van Keirbulck – “The race was very hard. In the final, I didn’t know if my opponent was stronger. I tried to attack many times but he was able to catch my wheel every time. So I decided to wait till the sprint and I could beat him.”

“Now with Wanty-Groupe Gobert I became a leader. In my last team, I always had to ride for a better rider. I had to ride in front almost every race. Now I am a bit more relaxed but very motivated to go for my own goals. In Nieuwsblad and Kuurne I was strong but I made some mistakes. Now I am in good shape, but not yet 100%.”

“I want to get other wins. Sunday I will race Dwars door West-Vlaanderen, then go on training camp with the team in Benidorm to prepare what is coming. After, I will ride Nokere Koerse, Dwars door Vlaanderen and all the cobble classics. I’ll try to win every race if I get an opportunity.”

Hilaire Van der Schueren (Directeur Sportif): “What a day ! We needed to win early in the season. Now we can go for the next one. Guillaume was the strongest in the race. He showed it a bit too much. But the win is for all the team. Everybody worked hard for him and he was able to get back at the top. For the next races we will work with him as a leader. But Backaert was also strong (5th) and Kreder got a puncture on the last cobble sections, otherwise he would be able to sprint for top 5.” 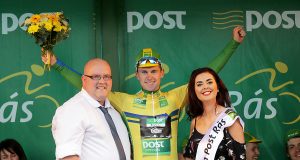