Australian time trial champion Grace Brown has continued her dream start to her debut season with Mitchelton-SCOTT, claiming an emphatic victory on stage three at the Santos Women’s Tour Down Under.

The 26-year-old launched her sprint early, but was too good for the bunch as she motored away to victory. Teammates Gracie Elvin and Amanda Spratt finished fourth and fifth respectively, with Spratt holding her overall 49-second lead heading into tomorrow’s final day.

Windy conditions provided a backdrop for aggressive racing, but the efforts of Mitchelton-SCOTT never allowed any attempted moves to gain too much traction and the race remained together for the majority of the 104.5km stage.

Shouldering a mountain of work on the opening two stages, including playing a crucial role in setting up her team leader Spratt into yesterday’s final climb, Brown continued her selfless role on today’s stage from Nairne to Stirling.

The Australian took over at the front of the race in the final 10 kilometres before still having enough in the tank to launch her sprint early, from 700 metres to go, to ride her rivals off the wheel and to an impressive victory.

With just one stage remaining, a criterium in the centre of Adelaide, Spratt still leads the overall classification by 49 seconds from Mitchelton-SCOTT teammate Lucy Kennedy and 55 seconds to Krista Doebel-Hickok (Rally UHC Cycling).

Despite the comfortable lead, Spratt is well aware of the importance of staying safe, having suffered a crash in the same position 12 months ago.

Grace Brown – “I am pretty happy. It was the team plan for me and Gracie (Elvin) to have a going the final here and it’s really awesome after all the hard work that I get a victory myself.

“It was a really hard day actually, much harder than I was expecting. I think my legs are feeling it from the last two days and there was a little bit of doubt, especially after the neutralisation I felt a bit dead, but I think everyone felt it. I have got family and friends here watching so it’s really cool to do that in front of them.”

Amanda Spratt – “Another great day for the team. Most of the stage they were just controlling it and making sure nothing dangerous got up the road, which was perfect, and then we said in the final we really wanted to work for Grace and Gracie and actually Grace had already done a monster amount of work on the front in that final ten kilometres and just never died in the lead out.

“Grace has just been so strong in all of the races so far and such a great teammate already, so I am really really happy for her.

“There’s just the criterium to go but as we saw last year it doesn’t always go smooth sailing, I had a crash there, so we are still going to have to be looking out for each other and hopefully it’s a bunch sprit and we can support (Sarah) Roy.” 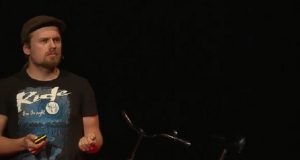 How cycling boosts our economy – Pekka Tahkola at TEDxBratislava (VIDEO)