Former World Cyclocross champion Eric de Vlaeminck has passed away after a long battle with Alzheimer’s and Parkinson’s diseases.

De Vlaeminck held the record for having won the Cyclo Cross World Championships seven times (in 1966, 1968, 1969, 1970, 1971, 1972, 1973). He missed winning in 1967 only because his bike was damaged during the race. On the road, he won the Tour of Belgium and a stage of the Tour de France amongst others races. He was also twice on the podium in Flèche Wallonne, and third in Gent-Wevelgem.

He managed all of this despite hanging up his wheels at the early age of 28. He would later go on to coach the Belgian cyclocross team. Sven Nys, Erwin Vervecken, Bart Wellens, Mario De Clercq and Kevin Pauwels took the World title whilst De Vlaeminck was coach.

Earlier this year, his brother Roger revealed the extent of his illness. “Eric has been suffering for two years from Alzheimer’s and Parkinson’s,” he said. “I went to visit him last week, but it wasn’t good. Eric recognised me, but I am one of the few.”

National coach Rudy De Bie heard the news this afternoon and told Het Nieuwsblad. “His death is a loss for the Belgian cycling. Eric was not only a great champion, he was also a very good person, someone with a passion for cycling. He helped a lot of young riders to be successful. He participated in the foundation of the success of the current guys riding.” 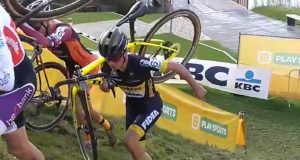