Cycling Ireland have announced the names of the five riders who will compete at this weekend’s UCI Cyclocross World Championships in Bogense, Denmark.

First to compete will be Adam McGarr and Sean Nolan in the Junior Men’s race on Saturday with David Conroy lining up in the U23 Men’s race. On Sunday, Lara Gillespie and Lucy O’Donnell will start the U23 Women’s race.

A record 289 riders from 24 countries head to Bogense – on the north side of Funen island – to participate in the Championships. Temperatures are expected to hover around freezing point, with sea winds adding to the challenge. Depending on conditions, the 3km long course near the picturesque harbour could transform in only a few hours from frozen and fast, to snow-covered and slippery or even muddy and slow.

Last year’s course – used for the UCI World Cup round in November 2017 – has been slightly modified. There are still several off-camber passages, but the main uphill section will be slightly easier, while the seafront section has been moved up a few metres, allowing fans to flank the course on both sides. 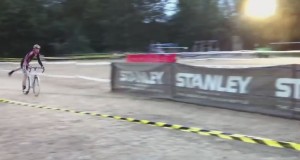 JOOOEEEEYYY, Without doubt the best worst attempt at a cyclocross dismount