On May 11th 1965, 20 year-old Eddy Merckx took the win in a race in Northern Brussels, the GP Stad Vilvoorde, and it was the first win of many in a remarkable career.

Merckx had a very successful amateur career and in his final season before turning pro, he finished in twelfth position at the 1964 Summer Olympics. Later in the season, he won the amateur road race at the UCI Road World Championships in Sallanches, France. Merckx remained an amateur through April of 1965 and finished his amateur career with eighty wins to his credit.

Merckx signed for the Solo-Superia team of the legendary Belgian cyclist, Rik van Looy, for his first year in the paid ranks. It would take him less than two weeks to get his first win, as he had only turned pro on April 29th. That victory came about when he outsprinted his training partner, Emile Daems, at the end of the race in Vilvoorde.

He returned to Vilvoorde later in the season for the Belgian Championships, but was unable to repeat the win, as he was outsprinted by Walter Godefroot for the victory.

He left Solo-Superia at the end of the season, having struggled somewhat in the team of the domineering figure of Van Looy. He had been treated badly by other riders on the team. Van Looy and other teammates would mock Merckx for his various habits and call him names. Despite having had a difficult time, he still notched up nine wins in his debut season.

Merckx joined the French team Peugeot in 1966, and won Milan-San Remo in just his second season. It was a remarkable win for a 21 year-old and was the first of 19 monument victories. He would retire in 1978 with an incredible 525 victories to his name. 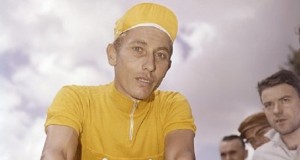