Fernando Gaviria (Quick-Step Floors) extended his overall lead at Colombia Oro y Paz (2.1) when he won the second stage on Wednesday. The Colombian sprinted home at the end of the 183.4-kilometre stage in Palmira ahead of Juan Sebastian Molano (Manzana Postobon) and Matteo Malucelli (Androni – Sidermec – Bottecchia).

Once again, Iljo Keisse and Jhonatan Narvaez had the task of controlling the six-man breakaway who got green light from the peloton after the day’s first intermediate sprint, nabbed by Gaviria. The Quick-Step Floors duo, helped by a couple of other teams in the last 20 kilometres, cut back the deficit to a minute and made sure of mopping them up inside the last ten kilometres of the stage to Palmira, the finishing venue for the second straight day.

With two kilometres left, Alvaro Hodeg stretched out the peloton, before Maximiliano Richeze took over in the final and launched Gaviria as he approached the last corner of the stage. From there, the pink jersey wearer unleashed an impressive burst of speed and eased over the line arms aloft, celebrating his third win of the season.

Gaviria now leads overall from Molano by 11″ with Miguel Angel Rubiano (Coldeportes – Claro) in third at 14″.

“Of course I am very happy, because it was another perfect day for Quick-Step Floors,” said Gaviria after retaining the lead in the overall, points and youth classification. “Elia won in the morning and a few hours later I took another victory in front of my family and supporters, who were again unbelievable. It was a long day with high temperatures, but we controlled it – also with the help of other teams – and the win is for my fantastic teammates.”

Stage 3, from Palmira to Buga, will be the last opportunity for the sprinters at this edition, and even though he dominated both bunch gallops so far, Gaviria doesn’t take anything for granted: “Tomorrow we will have a different stage, with a long, straight finish. It would be a dream to complete a hat-trick of victories, but I’m not thinking of this now. All I want is to enjoy this beautiful moment together with my teammates and countrymen.” 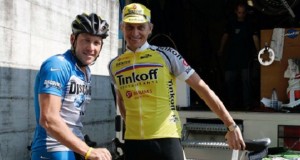