Both Felix English and David McCarthy will start for their JLT Condor team in the Mitchelton Bay Cycling Classic starting on Friday, which consists of a series of four criteriums. English will compete in the Elite races, whilst McCarthy is entered in the support races.

English also took part in the race series last year, and came close to victory on the opening race in Geelong, being beaten into second place by Zak Dempster.

He has shown himself to be a very strong criterium rider, but will be up against it, as a lot of top Australian riders are also entered. Orica-Green Edge also have a team entered, which includes Caleb Ewan and Cameron Meyer, amongst others.

McCarthy meanwhile, is a new signing for the team. A statement from the team when the Corkman signed outlined thier plans for the forthcoming season.

“Irishman David McCarthy joins JLT Condor following a successful first season as a senior rider, which culminated in the youngster riding the latter part of the 2014 season for the Continental An Post-Chainreaction team in Belgium. In 2015 team manager John Herety will be looking to develop McCarthy’s endurance for the longer tougher events, which the Irishman has already shown an ability to perform in.” 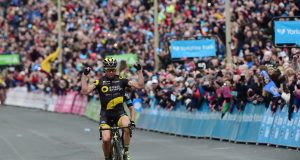