Rain began to fall as Fabian Cancellara readied on the start ramp for the 6.4-kilometre prologue that opened the Tour de Suisse today, adding an extra difficulty to the technical course but not preventing him from winning in a time of seven minutes and thirty-eight seconds, a mere six-hundredths of a second faster than Jurgen Roelandts (Lotto Soudal).

“It was not fun to be standing on the start ramp and seeing the rain,” said Cancellara. “You know that it will be wet roads, and I knew then it would be like a poker game. Honestly, I was really nervous for today, and for me, it was really important to win. For many reasons: it’s a home race, my last time here, the history…”

Rain fell on and off during the race, and an ominous sky ahead of Cancellara’s start – the second last rider to tackle the tricky course – had the team’s mechanics ready with wheels for dry and wet roads.

Cancellara: “I had wheels ready at the start for wet and dry and in the end I took the tires for the dry because super slick goes better. But then I had wet roads on some of the corners, and it was hard to maintain the rhythm, the speed. I had rain from the climb to the chicane – around 2 kilometres, and the downhill was wet.”

The wet roads did hinder Cancellara, who was eight seconds behind the fastest time at the intermediate checkpoint at 3.2 kilometres, but he slowly gained ground back in the latter part of the course. In the final meters, knowing it would be close, he sprinted out of the saddle, and with a bike throw at the line eked out the victory by the narrowest of margins.

Cancellara: “In the end, I did what I could, and it worked out. Having a win in my last Tour de Suisse means a lot, this stands out. I will enjoy the night and the day tomorrow in the yellow. I will do what I can to try and defend, but it’s going to be a hard week, but we go on in yellow tomorrow, and that is what is nice.” 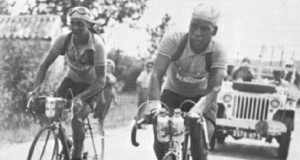