Cycling Ireland has announced that a proposal has been ratified which will see Enduro added to the list of disciplines officially recognised by the National Governing Body of the Sport. Enduro is a form of mountain biking which can be described as a combination of cross country and downhill riding, and has seen a huge growth in Ireland over the past number of years.

Enduro, which has evolved from Motorbike Enduro, is not governed by UCI and the competition involves multiple timed stages of downhill racing, along with untimed uphill sections. By officially recognising the discipline Cycling Ireland are supporting the growth of Enduro in Ireland, and offer guidance to event organisers. The Board of Cycling Ireland have also approved the holding of an Enduro National Championship event, with a demonstration event planned for 2017 and, subject to approval, the first official National Championship in 2018.

Cycling Ireland CEO Geoff Liffey welcomes the move highlighting the surge of interest in this area of the sport: “Enduro has seen a lot of growth in recent years, and has captured the interest of a lot of bike riders. We are delighted to officially recognise this area of the sport, as its unique competition format both creates a visually engaging sport for the spectator, while being a friendly and accessible activity for the cyclist. Including it in our calendar of events and ratifying it by the federation will open our sport up to more people across the country.”

Liffey added: “I would like to thank everyone for their contributions in bringing this to pass; especially Stephen McDonald from the Off-road Commission, Glyn O’Brien from First Tracks MTB, and Niall Davis from Biking.ie for their contribution and advice in preparing the rules and format of Enduro. I would also like to thank all the clubs and members who provided feedback throughout the process.”

Enduro Representative on the Off-road Commission Stephen McDonald has also welcomed the move saying: “It’s fantastic news that CI has recognised Enduro; hopefully more cycling federations will now follow their lead. Enduro is a growing discipline gaining major support each season for the various race series through to club training days throughout Ireland.”

“With the EWS [Enduro World Series] visiting Carrick again for the third year this has firmly put our island on the Off-road cycling world stage. That coupled with so many local riders who competed, gained podiums and won at previous world rounds speaks volumes for the talent our riders have.”

“Having had Biking.ie and First Tracks at the forefront with their respective race series has undoubtedly encouraged and introduced riders to Enduro racing, also the Munster and Davagh Enduro single day events and the newly announced Grassroots series ensures the sport will grow and progress at all levels.”

Over the coming weeks the Enduro guidelines will be available on the Cycling Ireland website. 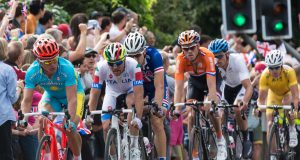 Health experts call for Rio Olympics to be postponed or moved