This year, Milano Sanremo will look a little different. For one, the race, which is such a rite of spring in Italy that it is also named La Primavera, will be held under the hot summer sun, as it had to be postponed due to the recent lockdowns in Italy.

Several towns along the coast were not prepared to host the race, so the course has been changed, too. This year, the peloton will reach the seaside in Imperia, after 257 kilometres of racing. That means that the iconic passage over the Turchino has been left out. Instead, the riders will ascend two minor climbs: the Niella Belbo at the 161-kilometre mark and the Colle di Navia after 229 kilometres.

From Imperia, the traditional finale remains the same: first, the swooping 5.6-kilometre climb of the Cipressa followed by a high-speed descent onto the climb of the Poggio. The Poggio is only 3.7 kilometres in length, but it always proves decisive. It switchbacks jut up to its summit, which is only 5.3 kilometres from the finish and is followed by a breakneck descent towards Sanremo and the line on the Via Roma.

“It’s a symbol,” says EF Pro Cycling’s Italian classics star Alberto Bettiol. “It’s the only race on the calendar of 300 kilometres, and for us Italians, it is a dream to win it, because all the best riders in history have won it.”

Although Alberto has already won one of cycling’s monuments, the Ronde van Vlaanderen last year, winning Milano-Sanremo would be even more special.

“To win it in Italy and to win it in front of the Italian people, in my country, it’s something that’s difficult even to dream. It is Milano-Sanremo. I am Italian. It would be something unbelievable, indescribable,” he says.

“This year, I will try not to attack,” Alberto says. “I will stay on the wheels and play my cards in the sprint, because the sprint in Milano Sanremo is not a normal sprint; it’s a sprint after more than six and a half hours. This year, it’s going to be a sprint after a long ride below a really hot sun, so the energy will not be too high. I will do my best, as always. Milan Sanremo is a different race compared to all the others.”

EF Pro Cycling’s Simon Clarke finished ninth in the sprint on the Via Roma last year, after catching the lead group with a blistering last descent. The race has a special place in his heart too. He broke his back trying to win it in 2018.

“When I first came to Europe in 2003 when I was 16-yeas-old, I stayed in Italy and raced in Italy with the Australian national team,” he says. “So, it is probably the European country that I have raced the most in, and I feel most at home racing in. I really love racing here, and appreciate every time I am able to line up for such a significant race.”

“I had a good result last year with the top 10 and I am definitely aiming to try to better that result this year,” he says. “We also have Alberto riding really well at the moment. The priority is to get a good result for the team like we were able to do at Strade Bianche. Depending on how the race will play out, it will be myself or Bettiol going for a top result.” 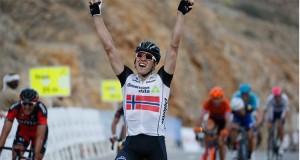 Boasson Hagen secures 2nd victory of the week at the Tour...