Two friends from local cycling clubs, Brian Hammond (Lucan CRC) & Colin Maher (Clondalkin CC), have gotten together to try and help Dublin Simon Community this winter. The idea is simple and calls on all cyclists and runners to donate all unwanted tops, jerseys, jackets, hats, gloves, gilets, rain jackets to Dublin Simon Community to help their team keep people on the streets warm this winter.

Leading bike shops around Dublin have joined in and offered their assistance as collection points. This means that if people want to help all they have to do is bag up their unwanted gear and drop it to participating shops.

“For us in Simon, cycling and running gear is ideal for our clients on the streets and we would like to thank everyone in Lucan CRC and Clondalkin CC for their generous support,” said Martina Bergin of Dublin Simon Community’s Rough Sleeper Team.

“Every night our team hands out gear to our clients as base layers that can be worn under their clothes. These extra layers provide extra warmth when bedding down on the streets at night or when walking around during the day. It is simply all about keeping people warm and sports gear, like cycling tops and jackets, are ideal for this”.

The idea started one Sunday morning before a club spin. “One Sunday morning our club turned up at its local meeting point, as we were about to set off on our spin we noticed that there were some people sleeping rough nearby” said Colin Maher, Clondalkin Cycling Club.

“It really affected us a club that there were people sleeping rough in our community. We were only there to meet our friends and head out on a spin and here were these poor guys who had to spend the night there in the cold. At times like that you realise how fortunate you are and so we decided to do something.”

Clondalkin CC got in touch with the Dublin Simon Community and met with Martina Bergin and asked how they could help. Clondalkin CC then launched a campaign for its members to collect old gear for Dublin Simon Community. The news spread and the lead was taken up by a friend in a neighbouring club. Brian Hammond from Lucan promoted it across the members of the West Dublin Club and received a fantastic response.

“The response last year was incredible” said Hammond. “I lost count of the numbers of bags of cycling, running tops, jackets, hats, gloves and all kinds of great clothing that we were able to collect and give to Simon. We thought to ourselves that if we can fill this amount from just two clubs, imagine the difference we could make for Simon if we get every club in Dublin involved?”

To make this fantastic initiative bigger and better this year, the two riders have got some of Dublin’s best known bike shops to help as collection points for Simon. “All cyclists and runners have loads of gear that either doesn’t fit, or it was an impulse buy or they simply never wear it anymore” said Maher.

“There is unwanted gear stuck in wardrobes in every cyclist/runners house that could be bagged and dropped into any of these shops. Dublin Simon will collect, and get it to where it’s needed quickly” said Maher. “We hope that all keen cyclists will go through their wardrobes and fill a bag.”

“We also hope that this idea is shared and promoted across all clubs in Dublin” said Hammond, adding that “if more local bike shops want to get in touch they would be more than welcome, get in touch with either myself or Colin and we’ll put them in touch with Simon to start arranging collection”. 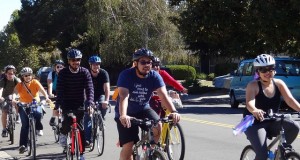 New Californian law will require cyclists to pull in if traffic...