Julius Johansen (Denmark) won the Junior Men’s Road Race at the UCI Road World Championships in Bergen, Norway today after attacking alone on the final lap of the 135-kilometre race.

Coming up to the final ascent of Salmon Hill, Johansen attacked the lead group and gained a lead of half a minute as he crested the top of the climb. He tucked down onto his top tube for the descent to maintain his lead on the run-in to the finish.

The Dane held off a strong chase to solo to victory, finishing 51″ ahead of the Italian pair of Luca Rastelli and Michele Gazzoli who had to settle for second and third.

Johansen’s victory was the second consecutive win for a Danish rider after Jakob Egholm won in Doha last year.

“I know I have very good shape before (the World Championships) and I could show you guys I also had it today, and yeah it’s just amazing,” said Johansen afterwards.

Regarding his tactic coming into the race, he said: “I always go too early on the breakaways, and so the tactic today was to wait and wait and wait and hope all the first attacks come back to the peloton, and yeah they did, and I could go on the last lap and that was just amazing, that was the plan and it worked out fantastic.”

“It was very very important to me, I go out and should ride a contract next year, on the Danish team. I have a world title now, that’s the best that could happen to me” 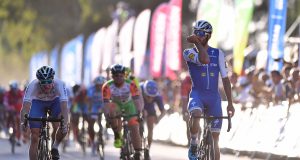