One year after winning the race with Clemens Fankhauser, the Tirol Cycling Team will attempt to once again shine in An Post Rás, with the Austrian outfit confirming that it will take part in next month’s race.

Although Fankhauser has moved to the Hrinkow Advarics CYcleanG team – and will defend his title with them – the Tirol Cycling squad remains ambitious. That said, directeur sportif Norbert Dürauer emphasises that the roster comprises very young riders and so he will take a ‘wait and see’ approach.

“All of our riders have huge potential and great character. Since we played a very active role in the peloton last year we, of course, come with big ambitions to Ireland and send the “crème de la crème” of our team to An Post Rás,” he says.

The riders who will take part are Lukas Pöstlberger, Patrick Bosman, Mario Schoibl, Sebastian Schönberger and Alexander Wachter. Wachter competed last year, helping Fankhauser win the race, while the others will all debut in the UCI ranked event.

Pöstlberger has a host of strong results to his name, including a stage win in the 2012 Tour de l’Avenir, the national Australian time trial title, plus finishing 11th in the time trial in last year’s under 23 World Road Race Championships.

He has shown strong form this season, winning the prologue of the 2.2-ranked Istrian Spring Trophy in March.

“He is only small steps away from joining one of the big teams in cycling,” states Dürauer. “If he had not suffered from various crashes and injuries in the past he probably would have made the jump already.”

Schönberger also impressed at last year’s World Championships, being out front for over 100 kilometres in the under 23 road race. Wachter was the European Junior Road Race Champion in 2013, while Bosman was third on a stage of the Giro Aosta last season.

Schoibl is described as the team’s brain by Dürauer, who states that he has taken multiple top ten results in UCI races and will guide the others on the squad.

“We are fully aware that a ‘copy paste’ of 2014 will be very, very difficult,” he said, making clear that he won’t demand his riders win overall.

“We have a young team and instead of putting pressure on them we focus on supporting them on their way to the top. We want to provide our talent with a perfect platform (training, equipment, race schedule, etc.) so they can develop.

“But, if it comes to racing, we always want to play an active role and influence the race by our style of racing. So it will be at An Post Rás, too. The tour is very long and also, due to the weather in Ireland, we will think day by day and do not focus on the GC from the very beginning.

“Of course we want to justify our invitation and be on the podium at one stage minimum. Better more, of course, and better also a top rank in the GC, too.” 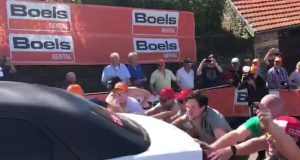