Dan Martin (Quick Step Floors) has been linked with a move to UAE Team Emirates, according to an article in today’s La Gazzetta dello Sport.

The team managed by Giuseppe Saronni are said to be interested in building a team around Fabio Aru (Astana), Martin and Elia Viviani (Team Sky) with Aru being offered a three-year deal which would take him through to 2020. The Sardinian rider has also been linked with a move to Trek-Segafredo.

Aru currently lies in second place in the Tour de France with Martin in seventh place. According to the article, Aru’s Astana team-mate Paolo Tiralongo would also be offered a management position with the team with Aru’s friend and Astana press officer Matteo Cavazzuti also joining. Another rider linked with a move to the Emirati team is Diego Rosa of Team Sky.

27 year-old Aru has been with Astana since the start of his professional career in 2012. Since then, he has finished in 3rd place at the Giro d’Italia in 2014 and 2nd the following year before going on to take his first Grand Tour victory at the Vuelta a España later that season.

Martin has ridden for the Quick Step team for the past two seasons, having previously ridden with the Garmin team. During his first year with the team, the Irish rider won stages in the Volta a la Comunitat Valenciana and Volta a Catalunya.

This season, 30 year-old Martin has won a stage of the Volta ao Algarve and finished on the podium at Liège–Bastogne–Liège, La Flèche Wallonne, Paris–Nice and Critérium du Dauphiné. 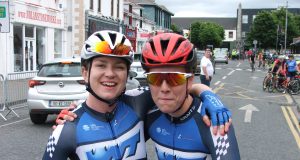 Lydia Boylan Makes it Three in a Row at Irish National...