Dan Martin (Quick Step Floors) put in a great performance on the penultimate stage of Paris-Nice where he finished third, grabbing valuable bonus seconds at the top of Col de la Couillole – the event’s highest ever summit finish (1678 meters) – and moving up to the podium of the race, half a minute behind new race leader Sergio Henao (Team Sky).

Part of a reduced elite group with around four kilometres left, Martin lost contact with his opponents after eventual stage winner Richie Porte (BMC) surged on the steep section of Col de la Couillolle – a 15km-long ascent with varying gradients – but continued to climb in his own rhythm and managed to close the gap on Henao, before pipping the Colombian on the line and taking his first World Tour podium of the year.

One of the protected Quick-Step Floors riders during Saturday’s stage which had a big impact on the general classification, Martin went in pursuit of the riders up the road in the closing kilometres of stage seven, erased a 15-second deficit and came within touching distance of former race winner Alberto Contador (Trek-Segafredo), who finished runner-up on the day.

“I am super happy with my performance, though it comes a bit as a surprise,” said Martin. “I was a little sick after racing in Portugal and couldn’t do the work in training that I wanted to, but before that, the winter was perfect. It’s the first time that I try to ride for the GC at Paris-Nice and for now it’s going well, but I know a lot can change tomorrow. The fight isn’t over and now I need to recover for Sunday. We are still in the fight to win Paris-Nice and after so many hard days I’m not going to stop trying now, so I’m quite optimistic for tomorrow.”

At the top of the overall standings since the end of stage four, which saw him score an emphatic victory in the race’s sole individual time trial on the punishing slopes of Mont-Brouilly, Julian Alaphilippe suffered on the long climb and was dropped with ten kilometres to go, due to an injection of pace at the head of the bunch. The Frenchman didn’t give up, and helped by a hard-working and selfless David De La Cruz, showed his determination and panache, as he tried to reduce the damage in order to keep his options open for the eighth and final stage of Paris-Nice.

“Can’t say I am disappointed, because it was a very tough climb and I was aware of that before the start of the stage,” said Alaphilippe. “I want to say a huge thanks to all my teammates, who once again did a great job throughout the day. They were unbelievable, I’m proud of them and can’t be sad after losing the yellow jersey. I did my best, it was a beautiful week so far and it isn’t over yet. It was great to see so many fans cheered for me, as their support and my stint in yellow made this experience a fantastic one.” 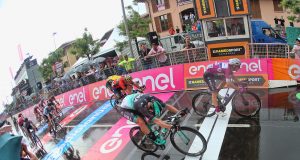 Sam Bennett goes close to hat-trick of wins at the Giro...