Coryn Rivera has taken her second stage victory at the Internationale Lotto Thüringen Ladies Tour, sealing the deal on the stage three honours after her Sunweb team animated the finale on the first of two queen stages.

The American rider sprinted home ahead of Lisa Brennauer (Wiggle High5) and Roxane Fournier (FDJ Nouvelle Aquitaine Futuroscope) at the end of the 131-kilometre stage starting and finishing in Schleiz. This followed on from her win on the opening stage and second place the following day. Rivera now leads the race overall by 15″ from Brennauer with Fournier in third a further 2″ back.

Speaking of the win, Rivera said: “Today was an even better day of teamwork. We were always under control, protecting Ellen, making the race, being represented in all the dangerous moves, and to top it off we still pulled off a super awesome and well timed lead out for the victory!

“Lucinda was a monster in the most prominent break of the day and as soon as it was brought back, we switched our mindset to the lead out train. Lucinda made a move on the descent with one kilometre to go and although Ellen and I were a bit gapped off, we used our extra speed to time our pass into the last corner to perfection so that she could deliver me to another victory. The girls did an awesome job today and I’m super grateful that they believe in me and ride for me in the sprints.”

Team Sunweb coach Hans Timmermans added: “It’s brilliant to take another stage win after a great stage by the whole team; we are proving to be really strong here. We owned the race from start to finish and really went for it on the hilly part of the stage launching attack after attack. We had representation in the important moves which was great, and then the team did a great lead out for Coryn to take the win. It was another fantastic job today and we can be very proud of this team.” 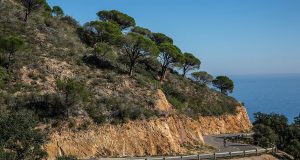 The Col Collective on the Costa Brava (VIDEO)