Irish rider Conor Dunne has been announced as part of the Aqua Blue Sport line-up for the Vuelta a España. It will mark the Grand Tour debut for the 25 year-old.

Breakaway specialist Dunne has achieved a number of podium places with most notably a third-place finish at the Irish National Championships.

Michel Kreder has just finished on the podium with a third place overall at the spectacular Arctic Tour of Norway while Mark Christian has performed well in the GC role in his first year Pro Continental level including seventh at Tour of Yorkshire 14th at Baloise Belgium Tour.

Larry Warbasse has taken a stage at the 2017 Tour de Suisse and also won the United States Road Race Championships. Austrian Stefan Denifl was the overall victor at the Tour of Austria.

Also there is British sprinter Adam Blythe who will focus on the sprint stages looking to break his four second place run this season.

Danish rider Lasse Norman Hansen finished on the podium of the Dwars Door West-Vlaanderen Johan Museeuw Classic and also was the overall winner of the climbers jersey at the Tour de Suisse.

Kiwi Aaron Gate has taken silver at the World Track Championships in the Omnium and will work closely with Blythe in the sprints.

Meanwhile Peter Koning, a Time Trial specialist, will be in the engine room of the sprint lead out train for Blythe and will also hunt for breakaways.

Rick Delaney, owner of Aqua Blue Sport, has said that the Vuelta start will be a dream come true for the young Irish project. He said: “All of us here at Aqua Blue Sport, in the competitive side and in the eCommerce venture at www.aquabluesport.com are all incredibly excited to be part of this fantastic event.

“We dreamed at the start of the year that we would get a start at a Grand Tour – to think that has come to fruition is extraordinary. The team we are sending is a very strong, solid team with riders who can compete on all terrain.

“We are looking forward to see Aqua Blue Sport out on the roads and who knows, we might just pull off the ultimate dream – a stage win. Watch this space.” 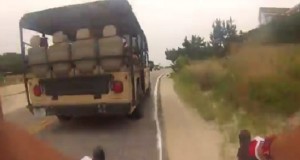 US cyclist criticised for filing lawsuit against motorist for unsafe overtaking...