Prior to the final stage of the Tour de France, race director Christian Prudhomme has said that reducing the number of riders per team would help to revive interest in the race.

“More than ever, we need a rider less per team,” Prudhomme told L’Equipe. The current team size in the race is nine riders whereas in some other races in which World Tour teams take part in, team sizes can vary between six and eight riders.

Prudhomme feels that Team Sky have been too dominant in the mountains and reducing team sizes to eight riders would help to level the playing field.

He said that the team of the yellow jersey have “overpowered and locked out the race in the mountain passes.”

However, he feels that not all team managers will be in agreement with this suggestion. “Most of the big teams do not want to hear about that,” he said. “But perhaps they will understand that this is the best interests of cycling.” 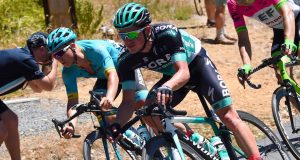 Peter Kennaugh takes time off from racing due to personal health...