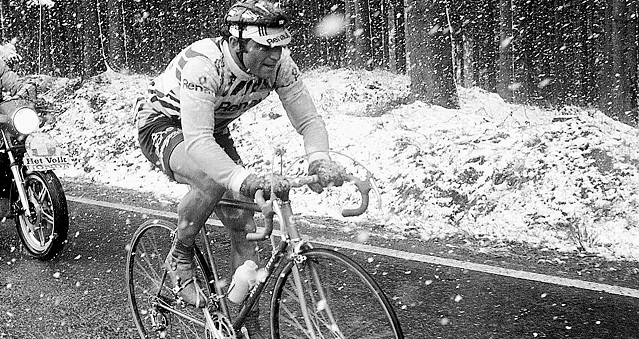 In 1980, Bernard Hinault won what turned out to be an incredible edition of Liege-Bastogne-Liege. That year, snow fell right from the start, leading commentators to call it ‘Neige-Bastogne-Neige’ (Snow-Bastogne-Snow’).

Bernard Hinault attacked with 80 km (50 mi) to go and finished nearly 10 minutes ahead.

A feature published by the British magazine, Procycling in 2000, described the infamous race:

Riders struggled on, with hands to faces to keep a view of the road. The race was an anonymous mass of plastic jackets and windcheaters. Spectators stood in goggles like upmarket snowmen, red-faced in the bitterness. Within the hour some teams had barely a man left on the road. They pulled out two dozen at a time, men like Gibi Baronchelli and Giuseppe Saronni, Lucien Van Impe and Jean-René Bernaudeau.

Bernard Hinault, the winner, was one of few to finish the course. It took three weeks for proper movement to return to two fingers of his right hand

Hinault talks about his win in this video (in French) which features footage of the race. 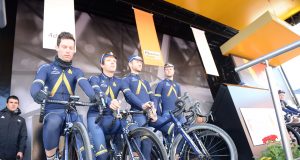