Annemiek van Vleuten finished safely in the chasing group on yesterday’s eighth stage of the Giro-Rosa to remain in the Maglia Rosa with two stages remaining.

A group of three riders escaped in the final kilometres of the 126-kilometre day, with Marianna Vos (WaowDeals) taking the stage win, whilst van Vleuten and stage six winner Amanda Spratt crossed the line in the chase group, 23 seconds behind to remain in a good position overall, heading into tomorrow’s Queen stage.

The stage was aggressive from the beginning with multiple attacks in the first half as riders tried to breakaway, hoping to take an opportunistic stage win. The first climb came after approximately 20 kilometres, and with a hard pace, the main peloton split into two groups leaving 70 riders in the front of the race.

Starting the day in first and second place overall, the two Mitchelton-SCOTT leaders worked to stay out of trouble throughout the day with teammate Gracie Elvin by their side, working to keep things under control. It was on the final descent with eight kilometres to go when a trio of riders, Vos, Elisa Longo-Borghini (Wiggle-High5) and Lucinda Brand (Team Sunweb) jumped away and held a big enough gap to contest the stage victory.

Van Vleuten heads into tomorrow’s penultimate stage with a two minute 29 second advantage over her closest rival on GC with Spratt slipping down to fourth just two seconds off the podium. Tomorrow the riders face the monstrous Monte Zoncolan, a 10.1-kilometre climb in the Carnic Alps with an elevation of 1,750 metres, an average gradient of 11.9% and a maximum gradient of 22%.

The climb was used men’s Giro d’Italia earlier this year and five times previously and the women’s race returns to the climb for the second time in history after a first appearance back in 1997.

Annemiek van Vleuten – “There’s never an easy day in the Giro-Rosa but we were in control again today and we had Gracie Elvin with us in the front, so I felt pretty comfortable and it was a good day for our team.

“After yesterday, I feel confident for the Zoncolan. I think it is less stressful than a day like today so I really look forward to the climb. I take the race day by day so we will have a talk about our tactics for the next days and I know the Zoncolan very well.” 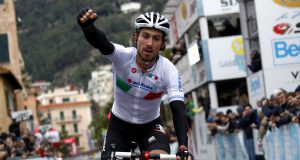