The line-up for the 2016 An Post Chain Reaction Sean Kelly racing team was officially announced today, with a 16-man team named, including a total of thirteen new signings.

The team enjoyed one of their most successful ever seasons on the UCI European Tour last year, which resulted in talented time-trial specialist, Ryan Mullen, making the well-deserved jump up to Pro Continental level with American outfit, Cannondale-Garmin, while Conor Dunne also made the switch to British-based team, JLT Condor.

Despite numerous changes in their ranks, the An Post Chain Reaction team still boast a strong Irish contingent with riders Damien Shaw, David Montgomery and Daniel Stewart penning one-year deals with the team.

Promising young talents Sean McKenna (Team Ireland) and Angus Fyffe (Omagh Wheelers) are also set to join the An Post outfit in May further underlining An Posts investment in youth. They will remain with their respective teams until after An Post Rás before signing with the team until the end of the season.

It is also a welcome return for Connor McConvey too as the Belfast boy is set for a third stint with the team adding a nice mix of youth and experience to the squad.

“After an intense couple of camps behind me during November and December, I’m feeling really good. Kurt (Bogaerts) has certainly put us through our paces with more climbing and the standard has been stepped up even further. Hopefully, this year, I can stay injury free and start to put consistent performances together. I’m hungrier now than ever and I just need to have faith in myself to deliver some good results.”

Westmeath native, Damien Shaw, who signed on the dotted line for the An Post team in December, was formerly a part-time rider due to his full-time job as a fireman. The Mullingar man has decided to focus solely on cycling after a barnstorming 2015, with a couple of second place finishes in An Post Rás. He sealed the deal on a season and career high, winning the Irish National Road Race Championship.

“Arriving late to cycling was not ideal but my aim is to prove that I can compete at a professional level and bring pride to the Irish national champion jersey that I will be wearing for the coming year. It will be a big test for me but I’m delighted to have the opportunity to get a taste of professional life and show other pros that I’m up to the standard.”

New Zealander, Aaron Gate, re-joins the team for a fourth consecutive year on the back of an impressive 2015 campaign that saw the Kiwi claim two stage finishes in An Post Rás.

Team mate, Jordan Stannus, has extended his contract with the team for a second season this year and will also have two new Australian compatriots alongside him in 23-year old, Oliver Kent-Spark, and 22-year old, Calvin Watson.

In addition to these, Belgian duo Emiel Wastyn and Nicolas Vereecken have signed for the 2016 campaign along with Dutchman Jasper Bovenhuis. Wastyn, formerly of Team3M, was the 2015 winner of the West Flanders Izgem Koers while Vereecken makes a return to Bogaerts’ squad where he was a key member in 2013.

Twenty-four year old Bovenhuis joins the An Post Chain Reaction team on the back of an impressive year, which included emerging victorious at the 9th Arno Wallaard Memorial (1.2).

Lastly, adding to the plethora of young talent in this year’s squad, US born ex-mountain biker, Sean Bennett, and British racer Jacob Scott are on the An Post Chain Reaction ticket making up what is an exciting new team for the year ahead.

After a hugely successful 2015 season, team manager Kurt Bogaerts is eager to carry on the momentum to this year’s racing calendar and hopes that his new signings can add a freshness and hunger to the squad.

“Every year, there is a re-building process that takes place. Riders can move from one team to the other, it’s the nature of the business. Every year we hope to have some really good results that we are satisfied with and that we can be proud of.”

“At the end of the day, we are a development team and we hope that we can push riders to higher teams like we did last year with Ryan Mullen and Sam Bennett in the past also. We hope this year that we can achieve the outstanding results again and help these young men to have a career in cycling. I’m looking forward to the season starting, we have a lot of talent in this squad.”

The squad’s first trip back to Ireland will come in May for the 64th edition of An Post Rás.

“We are hoping for similar results as last year, which were brilliant having several stage wins. It is a chance for us to show the Irish public what potential and strength we have and this year especially, I know we have the capability to push for general classification.”

The team was set up by Sean Kelly ten years ago as an extension of the Sean Kelly Academy to give young Irish cyclists a base from which to compete in Belgium, with the pro team designed to give young Irish riders access to a programme of top international races. This is An Post’s ninth year sponsoring the team.

Their first race of the 2016 calendar will take place on the 31st of January, the Grand Prix Cycliste la Marseillaise (1.1) 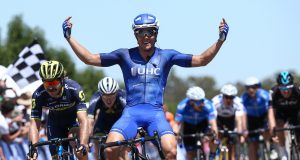