Julian Alaphilippe and former winner Philippe Gilbert will headline the Quick-Step Floors squad for the 104th edition of Liège-Bastogne-Liège on Sunday.

The classics season will come to a conclusion at Liège which is the oldest Monument of the calendar, and whose history runs all the way back to 1892. This year’s race is 258 kilometres long and includes eleven classified climbs, for a total of nearly 5000 vertical metres.

Quick-Step Floors have been a dominant force in this year’s one-day races, notching up ten victories with seven different riders, the latest to make his entry on the list being Julian Alaphilippe, who won in spectacular fashion the 82nd edition of Flèche Wallonne. The 25-year-old Frenchman, runner-up at his Liège-Bastogne-Liège debut in 2015, will return at the start of the Belgian Monument after an injury prevented him from taking part last year, and will be joined by fellow countryman Rémi Cavagna, 2011 winner Philippe Gilbert, Bob Jungels, Enric Mas, Maximilian Schachmann and Pieter Serry.

“Liège-Bastogne-Liège is one of the hardest one-day races of the calendar and if you look over the course, you can see that is has everything needed to turn into a war of attrition,” said Quick-Step Floors sports director Davide Bramati ahead of the season’s fourth Monument.

Up until this point, our classics campaign has been a sublime one, as we enjoyed success after success, and we won’t hide the fact we would like to draw the curtain on a high note. Everybody’s motivated for the final challenge of this spring, the confidence and enthusiasm in the team are huge after Flèche Wallonne and we are ready to let the legs do the talking on Sunday.” 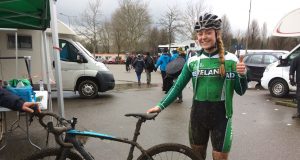 “The Irish fans were amazing” – Lara Gillespie describes her CX...