Adam Yates (Mitchetlon-SCOTT) has claimed today’s stage victory on the first hill top finish in Volta Ciclista a Catalunya, after sprinting to the win from a reduced group of five riders.

On the final 11-kilometre climb up to the finish line in Vallter 2000, a natural selection was made followed by a flurry of attacks, which left just five riders at the front of the race to battle it out for the victory. Yates attacked a couple of times but wasn’t able to shake off the others who were quickly on his wheel and in the end it was his speed that gave him the victory, as he powered across the line to take an impressive stage victory.

With the road profile gradually heading north for today’s mountain test, many riders wanted to be in the day’s breakaway. A group of 11 riders escaped from the peloton in the early stages and with a long way to go, the bunch allowed them a steady lead of over seven minutes.

As the race headed into the final 60kilometres, with three hard first-category climbs remaining, the leaders’ advantage had dropped to just four minutes and continued to decrease with every kilometre that passed, with Movistar Team doing the majority of the chasing.

The breakaway group reduced in size down to seven riders over the challenging terrain and Mitchelton-SCOTT sent Michael Albasini to the front of the peloton to help with the chase and soon after the peloton sat just one and a half minutes behind the leaders.

As the bunch began the final ascent to the finish, the 11.2-kilometre climb with a 7.6% average gradient and pinches of 18%, the group naturally reduced and the final breakaway riders where caught with seven kilometres still to go.

The front of the race eventually whittled down to a group of around 10 riders with just Adam Yates in contention for Mitchetlon-SCOTT. Egan Bernal (Team Sky) and Nairo Quintana (Movistar) attacked away from the group but Yates paced his effort in hot pursuit and quickly made the junction.

The three leaders continued to attack and then slow down, unable to breakaway from each other and gradually Miguel Angel Lopez (Astana Pro Team) and Dan Martin (UAE) jumped across in time for the final kilometre.

Despite the constant attacks, the stage came down to a sprint between the five leaders, with Yates showing his speed to cross the line in first place and move up to second place overall just 27seconds behind Thomas De Gendt (Lotto-Soudal).

Adam Yates: “Last week I showed that I was in good condition, I came up short there and I really wanted to win today. On the climb Bernal and Quintana were really strong, when they attacked I held back a little bit just to pace my effort and slowly, slowly came back to them.

“Then it was a bit of a game. Quintana didn’t really want to work and in the end it was a sprint with 200metres to go and I managed to finish it off.

“Tomorrow we have another tough stage and another possibly for a stage win but we will see. So far so good, the team did a super job to look after me, so more of the same tomorrow hopefully.” 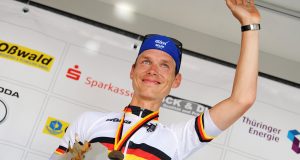