On the 25th of September 1985, the first stage of the inaugural Nissan Classic started outside Trinity College Dublin. The race would be a success from the off and would run for eight editions, giving the Irish public the opportunity to see many of the biggest names in the sport compete on their home roads.

The men behind the race were Alan Rushton and Pat McQuaid, and they had assembled a field consisting of eighteen teams. There were six professional teams from the continent, six British professional teams and six amateur national teams. Two of the amateur teams were Irish, namely the Irish amateur team which contained Anthony O’Gorman, Stephen Delaney, Bernie McCormack and John McQuaid. The Irish Olympic team included Stephen Spratt, Michael Kinsella and Raphael Kimmage.

Amongst the big names lining up in the race were the 1975 World Champion Hennie Kuiper of the Nissan-Verandilux team, his team mate Teun van Vliet and Adri van der Poel of the Kwantum team. However, it was local heroes, Stephen Roche and Sean Kelly, who were the big draws. Earlier that year, they had finished third and fourth in the Tour de France.

The opening stage took the riders from Dublin to Wexford over a distance of 158 kilometres, and Kelly showed that he meant business by winning the first hot spot sprint in Naas. The winning break of 10 riders formed just before Tullow. Amongst those who made it into the winning move were Kelly, Van Vliet, Van der Poel, Kim Eriksen of the La Vie Claire team and another Irishman, Gary Thompson. Roche was amongst those who missed out.

They worked well, and by the time they reached Wexford, their lead was ten minutes. The overall win would go to one of those who made the break. Despite a late attack by Van der Poel, Kelly managed to take the stage win and first yellow jersey after hauling the Dutchman back.

Stage 2 took the riders to Kelly’s home town of Carrick-on-Suir, but it didn’t go to plan, as instead it was Leo van Vliet who won the stage after laps of the town which included the climb of Seskin Hill.

The following day was a split stage, starting off with a 20 kilometre time-trial from Carrick to Clonmel. The race turned out to be the fastest time trial over 20 kilometres ever. Kelly not only caught Van der Poel, but also his two-minute man, Teun van Vliet.

Roche had been favoured by many to win the stage, and asked afterwards what he thought about losing by 49 seconds over such a short distance, he said, “Sean knew the course and must have taken a short cut.”

Kelly responded, “There’s no short cut from Carrick to Clonmel unless I took a speedboat up the river!”

One local was overheard saying about Kelly’s time-trial: “CIE (the national bus service) should be embarrassed as it takes the local buses longer than that.”

That afternoon, the riders had to face a stage to Cork over 115 kilometres. A break went clear, initiated by the Danish amateur, Brian Holm, but thanks to Kelly’s team mate, Frederic Vichot, it was brought back before Fermoy. In Cork city, the riders had to tackle St. Patrick’s Hill four times. Thirteen riders went clear, with Roche taking the win and Kelly finishing ten seconds later in second place. His overall lead was looking unassailable.

The riders had another split stage the following day. In the morning, they raced over 105 kilometres to Limerick. Roche claimed his second stage with an attack in the last three kilometres. Once again, Kelly finished second. That afternoon, saw the riders race to Galway and Teun van Vliet claimed the penultimate stage in Eyre Square.

After a transfer to Tullamore, the riders started the final stage to Dublin. Roche’s brother-in-law, Neil Martin of Bilton-Condor was amongst the early attackers but was brought back. Van der Poel made a late bid for victory in Dublin, and hung on to win the stage, while Kelly finished in fifth to win overall.

The crowds had been massive in Dublin, as they had been elsewhere around the country. Afterwards Kelly said, “Like everybody else, I was really surprised by the impact of the race on the public. I knew that the bike was popular in Ireland, but nothing like this.”

Rushton had brought some visitors from Nissan in Japan to see the spectacle and they committed to further sponsorship of the race. It would continue for another seven years, with the field going from strength to strength. The last edition in 1992 would be won by the Australian, Phil Anderson. 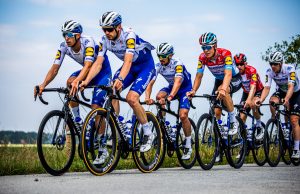 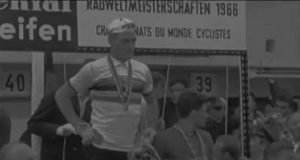