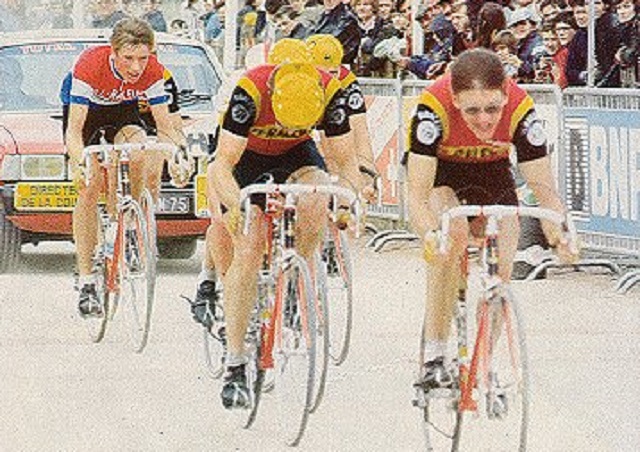 In 1978, the Tour de France featured a team time-trial which was an incredible 153 kilometres in length. It was the fourth stage of the race from Evreux to Caen, and instead of a team’s actual time applying, teams were given time bonuses based on their finishing positions.

The winners would be given a 2 minute bonus, 2nd got 1 minute 20 seconds, 3rd would receive 1 minute, 4th fastest 40 seconds and fifth a mere 20 seconds. Therefore, for many riders in the race it didn’t make too much difference how hard they raced.

The race favourites TI-Raleigh took the victory by just 7″ from the C&A team, with Joop Zoetemelk’s Miko-Mercier team 4’19” behind. Bernard Hinault’s Renault-Gitane team were 5’15” behind in fourth. The victory was enough to put Klaus Peter Thaler of the TI-Raleigh team into the race leader’s yellow jersey.

However, TI-Raleigh’s stage win wasn’t as straightforward as it appeared, and there was a reason why it was so close. Sean Kelly, in his book Hunger, would outline what was going on in the background.

Kelly said: “I had no idea of the internal conflicts that sometimes affected the Dutch teams and I only learned the story years later but there was a civil war going on at TI-Raleigh. Thaler was a West German riding for a Dutch team. The Dutch and the Germans often don’t see eye to eye. There’s a lot of rivalry between them and when you add in the history of the war there can be quite an edge to that rivalry.”

“Apparently Peter Post, the legendary and uncompromising manager of the TI-Raleigh squad, was not keen on having a German in the yellow jersey but knew that if TI-Raleigh won the team time trial, Thaler would take the race lead.”

So it turns out that Gerrie Knetemann had been trying to drop his own team mate that day. Knetemann would drop off the back of the team during the stage forcing Thaler to chase back on. He couldn’t be dropped through, and hung on to take yellow.

Hinault won go on to take his first of five victories in the Tour de France. TI-Raleigh took an incredible ten victories in the race, including the prologue and the final stage. The stage wins were spread around also, with Thaler, Jan Raas, Gerrie Knetemann, Hennie Kuiper, Henk Lubberding and Paul Wellens taking individual stage wins. 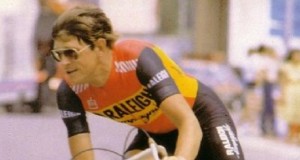