Forty years ago this year, the iconic polka dot jersey was introduced to the Tour de France. It meant that for the first time, the best climber in the race would wear a distinctive jersey.

The meilleur grimpeur (best climber) of the race had been first recognised by the l’Auto newspaper back in 1905, when René Pottier was chosen as the first winner. Others who would be recognised as meilleur grimpeur in the first few decades of the Tour included Tour winners Francois Faber, Octave Lapize and Ottavio Bottecchia.

In 1933, the meilleur grimpeur would be replaced by the King of the Mountains title. The first winner of the title was the Spaniard Vicente Trueba. Two decades later, Trueba’s compatriot Federico Bahamontes would win the title an incredible six times.

The polka dot jersey itself was introduced in 1975. The reason for the iconic design was that the first sponsors of the jersey, the chocolate manufacturer Poulain produced a chocolate bar with a polka dot wrapper. The first ever rider to wear the jersey was Dutchman, Joop Zoetemelk. However, the first winner was Belgian Lucien van Impe, who had already won the title in 1971 and 1972. Van Impe would also win the King of the Mountains title in 1977, 1981 and 1983 to equal Bahamontes’ record.

Other top climbers to win the jersey since have included Robert Millar, Luis Herrera and Thierry Claveyrolat. The record of Bahamontes and Van Impe was beaten in 2004, when Richard Virenque won his seventh title.

Despite Poulain no longer sponsoring the jersey, the design is set to stay, with red polka dots having become synonymous with the best climber award. 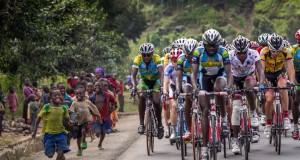 Land of Second Chances – The Impossible Rise of Rwanda’s Cycling...